Continuing on the UNWAVERING Actor Highlight series, today we are featuring Joe Morales.

In UNWAVERING Joe plays Tom who is the boyfriend of Sarah’s best friend Brittany. I was looking for someone who was cool, laid back, and charming. Of course, we chose Joe to fit that part.

Joe is very talented and has been a part of several films in the past couple years. He also is involved with radio and we’ve worked with him in Gretchen’s Lock. 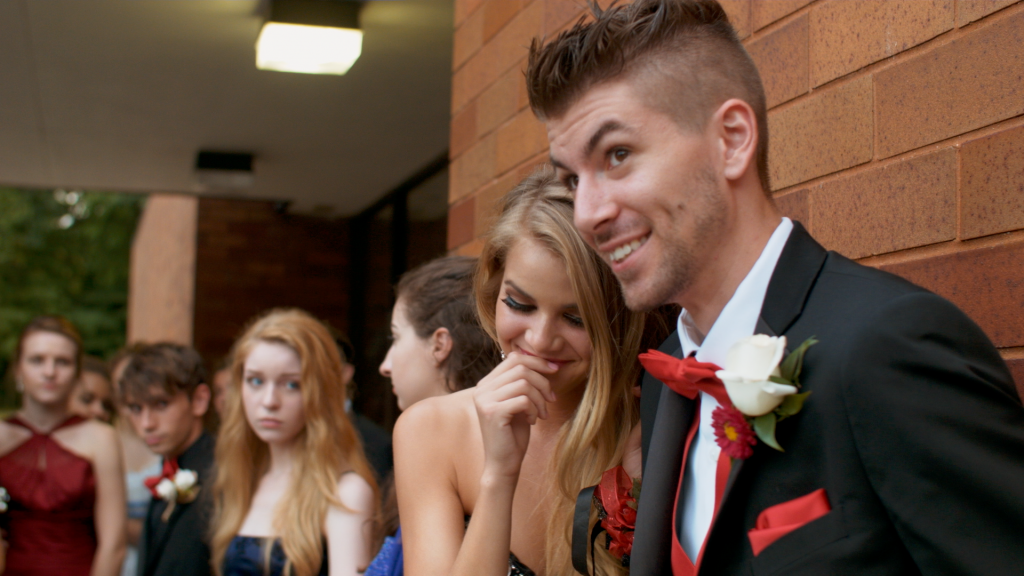 Here are the questions we asked Joe:

Joe: My favorite part of filming Unwavering was getting to reunite with some of the Gretchen’s Lock cast and crew. It is always a pleasure to see all of the familiar faces and meet the incredibly talented new faces I had not gotten to work with before. What makes it even better is that everyone is just so kind and each person just wants to make a great film. I also liked getting to ride in a hummer limo for the first time and getting dressed up for prom again brought back good memories from high school.

MPF: What is your favorite role you have ever played?

Joe: It is very difficult to pick a favorite role I have played. They all serve many purposes and are vastly different from each other. I have gotten to play the good guy, the bad guy and the not so great guy, each of those being a learning experience. My favorite roles though are always the more comedic ones, such as Luke, a Chinese man who is addicted to gambling, in Anything Goes. What was fun about that role was making people laugh. I had to attempt a Chinese accent that I did rather poorly, and I had a scene where I lost my clothes in strip poker so I had to take off my robe and show some skin. It was embarrassing to say the least because I was and am a little on the scrawny side and this all happened when I was a freshman in high school where everything is awkward anyway, but it got people to laugh and made it all worth it.

I also enjoy getting to voice Lt. Adam Carson, a character from The Topnotch Tangler which is a segment of It’s All Been Done Radio Hour. The segment is in a superhero universe and Lt. Adam Carson works for the police department. He is always too eager and over joyed to help the superheroes save the city so it is nice to be someone who is usually happy. Check it out at www.itsallbeendoneradiohour.com and take a listen to the other segments of the show, along with the other programs we take part in with It’s All Been Done Presents at www.iabdpresents.com

Joe: There are so many fantastic actors out there. The two actors that have always inspired me are Johnny Depp and Tom Hanks. Depp mainly plays very eccentric characters that have a tendency to go outside the box while Hanks plays many down to earth, but also very deep roles that have such power. Andrew Garfield has also become an inspiration to me because as I knew him as playing the snarky teenager Peter Parker from Spider Man, I recently watched him in Hacksaw Ridge and I was in awe. He brought such raw emotion to the role and I bet the real Desmond Doss would have been proud.

MPF: What is your favorite movie of all time?

Joe: John Carpenter’s Halloween will forever be my favorite movie. Aside from the performances and the cinematography, the score is what makes it just so creepy.

MPF: What are some of your hobbies?

Joe: I really enjoy going to the movies with friends, watching television, listening to music, taking my dogs for a walk and swimming. I have wanted to get more involved in photography and get back into music, but life gets in the way and I have not made time for that.

Joe: When I was little, my mom would tape my brother, sister, cousins, friends and myself doing skits of The Maury Show and Jerry Springer. We even did spoofs of Rush Hour, Tomb Raider, and A Nightmare on Elm Street. It essentially became our childhood and from there, I realized I enjoyed entertaining people with different characters from stories I wanted to tell. I then got into plays and musicals throughout middle and high school and after college, I started getting more into acting.

Joe: Tie between Blue and Green, but I also really like Red to.

Joe: I have not gotten to see any of the film thus far, but from the script, my favorite character is Yusaf. What I like about the character is that you do not really know where he stands. At one moment, he seems to want to help the girls and cares about what is happening. Then he is the complete opposite. It is that mystery of whether or not he is good or bad. Even though I haven’t seen it yet, I know that Nick plays it extraordinarily well.

Joe: “If you dream of doing it, make it come true.” Even though the options are best in the big cities like Los Angeles and New York City, Ohio has many options for aspiring actors and filmmakers alike that make it happen, as the Mennings do with their films. Sometimes, it just takes some passionate dreamers to make something happen.

Thank you, Joe, for your stellar performance! For information about the Grand Premiere of UNWAVERING be sure to sign up for the newsletter here: www.menningphotographicfilms.com/newsletter