Today on the UNWAVERING Actor Highlight series we are featuring the great Randy Campbell.

The role Randy played in UNWAVERING was the Preacher. Randy has a unique look and showed up to the audition with a suit and hat just like the headshot above. I didn’t have any specific type of preacher I was looking forward so I kept the role fairly open. As Randy began auditioning I pictured him preaching at a Southern Baptist church somewhere out in the country of Georgia. I loved that feel! Especially since we were going to film the baptism scene out in the country by a lake in Columbiana, Ohio.

Randy has had much involvement with local films and WGN America’s Outsiders. His charisma goes beyond the screen as he arrives mostly 1-2 hours early before every event to connect with the cast and crew members, and he is usually sitting outside of his car playing the guitar to pass the time before anyone else arrives. 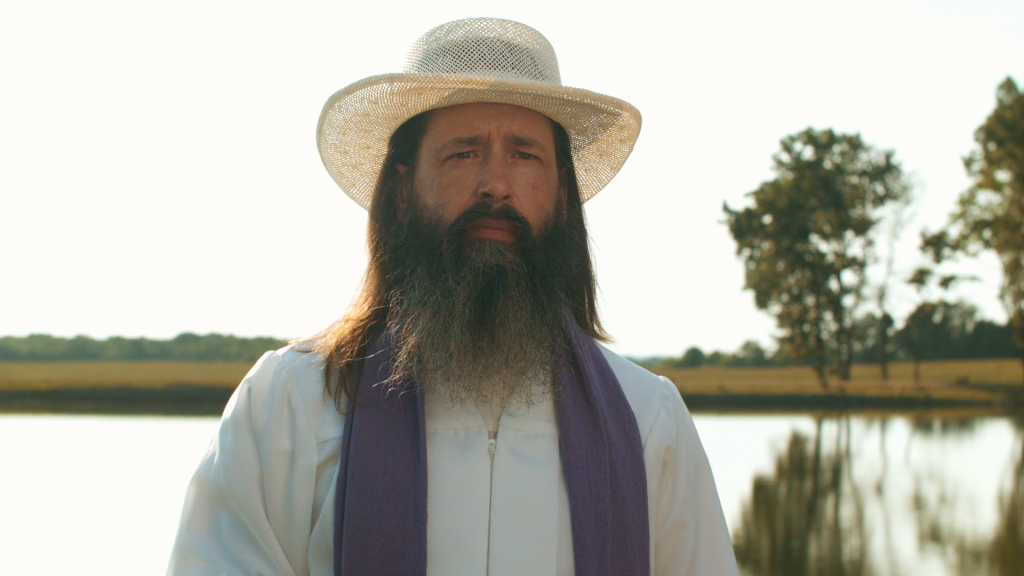 Here are the questions we asked Randy:

Randy: My favorite part of filming was how EVERYONE worked together to (make/let) each individual expand themselves to their fruition. In front as well as behind camera. It didn’t hurt my ego either that a very pretty young lady trusted me not to slip & drown her. Thanks Katie!

Randy: All actors inspire me even if they don’t have the skill to act. The love of doing & breaking beyond fear; inspiring yes.

Randy: Favorite Movie! Hard to say, I love so many. The Hobbit animated & live action ones & Darby O’Gill & the Little People. Hitchhikers Guide to the Galaxy, Stargate, Original Star Wars, E.T., Wizard of Oz original & new and so on!

Randy: Acting is in my blood from playing house as a child with the girls, or super heroes or ARMY with the guys (& girls) to kn-itching out my place in the world and adjusting to new situations as a teen to maturity. Even as a father & husband.

Randy: Favorite color has always been green. Must just be muh Irish a manifesting.

Randy: …PREACHER. Just loved being allowed to give him character. Gran’dad was a Preacher in the day. Never saw him preach as but spent many a day at his side after giving it up. The Preacher came out from time to time.

Randy: Learn about everything. All is fodder for the stage. Read tech manuals, medical journals, and law books out loud. Learn to speak the jargon well even if you have no idea what it means. The better you can articulate the easier it is to land great roles. It’s easy to talk bumpkin but speaking as the educated can’t be faked. Above all else follow whats in your heart; it’s okay to be small in what you do. Sometimes it’s the small things that touch the greatest audience. There is a star placed in all of us, don’t let others dim your shine! JUST SHINE BABY SHINE!

Thank you, Randy, for your terrific performance! For information about the Grand Premiere of UNWAVERING (ANNOUNCEMENT COMING SOON!) be sure to sign up for the newsletter here: